This summer my Quest for Beauty brought me to Ethiopia. I was there on assignment working with an agency called Off Road Ethiopia (they specialize in unconventional tours and are incredibly helpful and professional, I will write another post with more details of my itinerary and a quick guide soon)  and  to learn about the Tribes of the Omo Valley and their interesting body decoration traditions.

This, like many others, wasn’t an easy and comfortable trip both physically and emotionally. We were often in very remote areas. During my stay there were some political uprisings  (the government had the brilliant fucking idea to shut down the internet for the whole country in order to stop people from communicating on facebook and social medias), some violence occurred and some people died. I was far away from the heated areas, I was in the middle of nowhere, but we ran into some armed militia’s checkpoints on the road and it wasn’t exactly a pleasant experience. It was the first time I was in that kind of situation. I never felt in danger though, I had an amazing fixer that made sure everything went smooth at all times, but it made me think a lot about what freedom means.

Political issues aside, Ethiopia is a beautiful and incredibly diverse country home of 80 different ethnic groups where over 88 languages are spoken and landmarks space from huge stretches of green to dry harsh desert to mountains to volcanoes.

I landed in Addis Ababa, the booming fast growing capital. Things have changed a lot here over the last decade, the city is being torn down and rebuilt at an incredible speed, skyscrapers, buildings and new businesses are popping up like mushrooms every month, the economy is growing and opportunities that once seemed far fetch are now more than possible for the people of Addis.

Once leaving the capital though, just a few miles south things were much different. I had an unshakable feeling of time-traveling back to hundreds of years ago. We drove for 6 hours, sharing the roads with countless cows, donkeys, horses, goats, dogs and chickens,(my local fixer called it “African Traffic Jam”!). On the side of these roads I saw women and kids of all ages working in the fields, moving herds of cattle, carrying wood and water on their back for miles. Poverty was painfully evident and life looked anything but easy for people in the countryside.

After a first stop in the Bale mountains National park, where I saw animals I had never seen before like Yalas, warthogs, baboons and african wolves running around the mountains and forests freely, we finally headed to the Omo Valley.
I spent a couple of weeks visiting very remote villages of 9 different tribes. The only way to access these villages is through dirt roads and dried river beds. Once I got to the villages everything was exactly how I expected it but just less romanticizes. People still live in huts, there’s no electricity, food comes from what the land has to offer and from trading products with other tribes. Some people paint and decorate their bodies, some women pierce their ears or bottom lip and insert a wooden disk in it. Some wear traditional clothes, some wear more modern clothes, some wear no clothes, some have cellphones, some have guns.

In most tribes a man can have many wives. The first one is chosen by the husband’s family, the others by the husband himself. They have beautiful ceremonies, rituals and celebrations. It was incredible to get to see all this with my own eyes and capture it with my camera, freezing their souls forever onto a digital file. 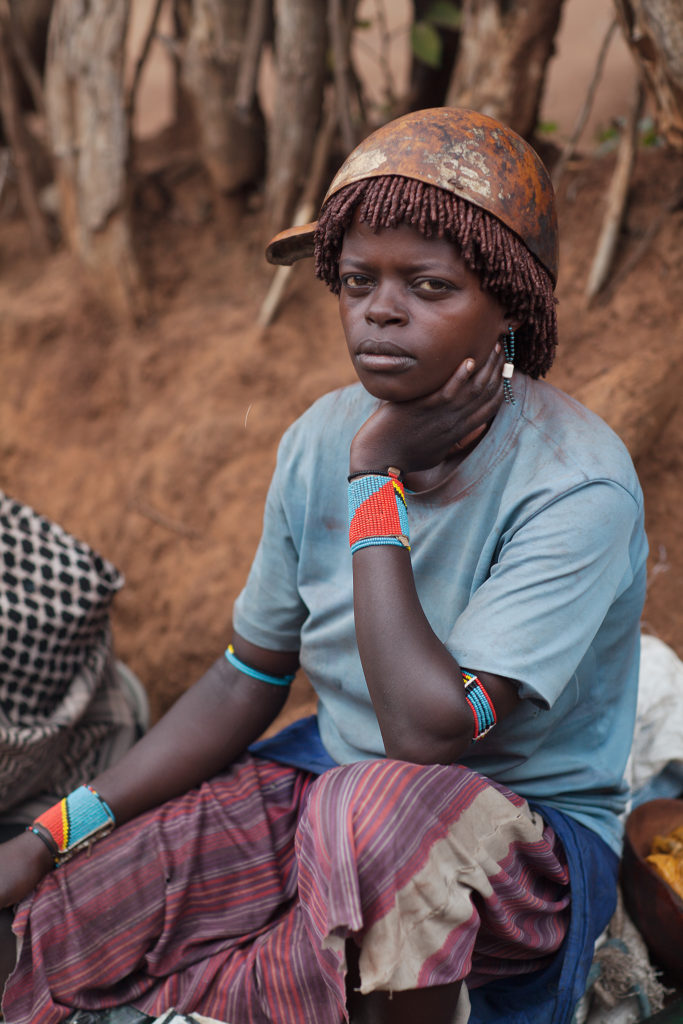 I drove back to Addis with a heavy heart. Seeing how so many women don’t get to have a saying in their own destiny and seeing children do such heavy labor made me realize how lucky most of us are to have a choice. To get to play, go to school and daydream during our childhood while many other kids around the word don’t get to have a childhood at all.

Ethiopia was beautiful and eyeopening. I am incredibly grateful for the experience and humbled that I got to see such a raw and remote part of our world. I felt different after this trip,  I couldn’t shake away a hint of tormenting sadness thinking about those people I photographed that I had left behind. I was going back to my comfortable world but they weren’t. They would keep working hard to put some bread on the table, to survive. When unfairness sits right in front of your eyes you can’t help but feeling a fire inside. A fire that makes you want to play your part, to change things. A fire that makes you hopeful to one day live in a world where everyone can have equal opportunities to fulfill their hopes and dreams, where everyone is in charge of their own life and destiny,  and where all children on earth can live out their childhood the way it’s supposed to.